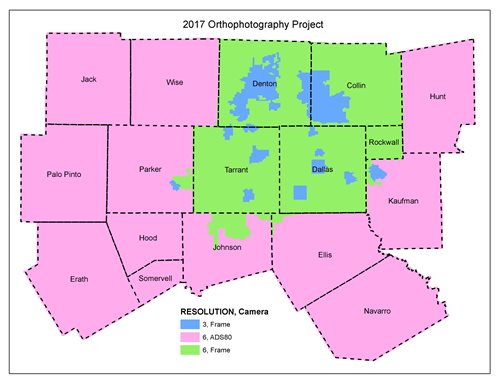 In 2017, the North Central Texas Council of Governments facilitated the cooperative purchase of 4-band (NIR), 3-inch and 6-inch resolution digital aerial photography (orthos) for over 13,800 square miles of the NCTCOG region including all of Collin, Dallas, Denton, Tarrant and Rockwall, Hunt, Kaufman, Ellis, Johnson, Hood, Navarro, Parker, Palo Pinto, Somervell, Wise and Jack counties.  The contractor for this project was Woolpert. The orthos were collected in January through March 2017 (leaf-off) and are available for purchase via DFWMaps Marketplace according to the following price schedule.

The coverage area for 2017 includes Dallas, Fort Worth, and surrounding urban and rural counties totaling 13,866 square miles, of which 587 square miles is 3” resolution.   The flight was flown with a mix of frame and pushbroom sensors.  Four areas of 6” true orthoimagery were produced over the central business districts of Dallas and Fort Worth, as well as the I-635/US-75 intersection and the Dallas North Tollway corridor from I-635 to Keller Springs Parkway, totaling approximately 48 square miles.

The flight design achieved a nominal ground-pixel resolution sufficient for developing 3” and  6" pixel orthophotography without oversampling. It was also designed with sufficient forward overlap and strip side laps to ensure total project area coverage.  The final aerial photography meets The American Society of Photogrammetry and Remote Sensing (ASPRS) Class I standard for 1” = 50 and 1"=100' scale mapping.

More information on the 2017 project can be found in the Project Plan and project level metadata:

For questions regarding the 2017 orthophotography project, send us an email.