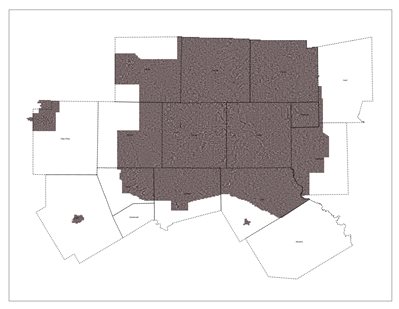 The contractor for this project was Sanborn.  The orthos were collected in January and February 2011 and are available for purchase via the DFWMaps Marketplace according to the following price schedule.

The coverage area for 2011 includes Dallas, Fort Worth, and surrounding urban and rural counties. Two areas of true orthoimagery were produced over the downtown areas of Dallas and Fort Worth.  The flight design achieved a nominal ground-pixel resolution sufficient for developing 6" pixel orthophotography without oversampling. It was also designed with sufficient forward overlap and strip side laps to ensure total project area coverage. The final orthoimagery meet National Map Accuracy Standards (NMAS) 1"=100' scale mapping (RMSE 1.55' x or y).

For more information on the 2011 orthophotography project, view the metadata.

For questions about the 2011 digital aerial photography project, send us an email.